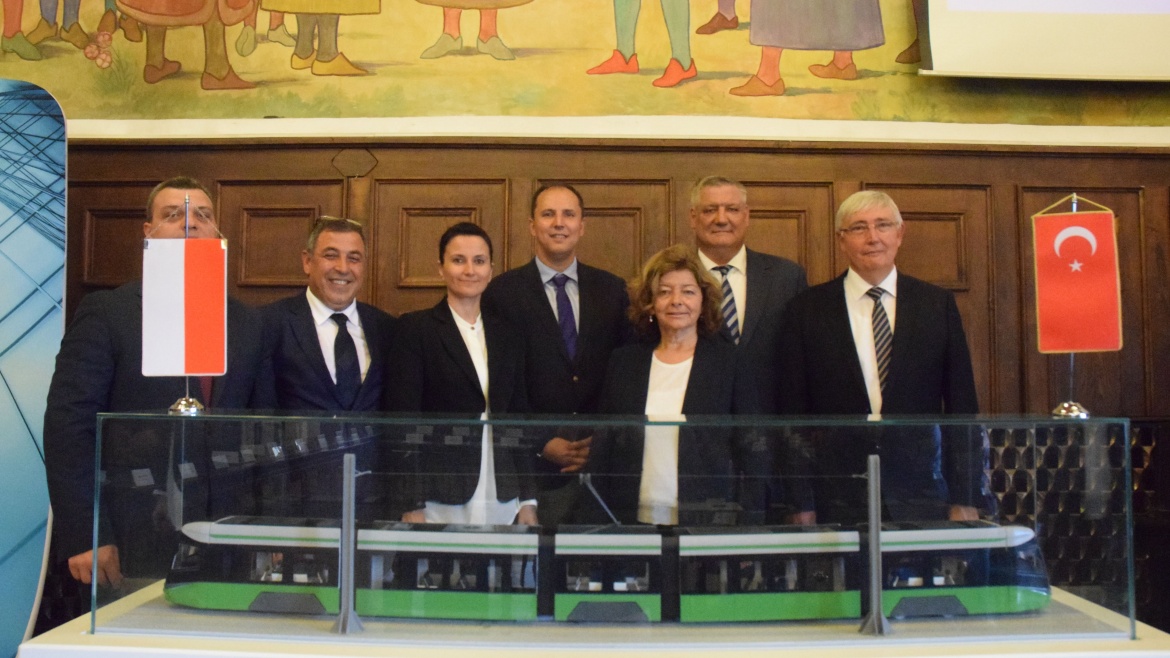 Agreements were made for Turkey’s first tram export to Poland

The tender, which costs about 20 million euros, was signed at a ceremony held in the Municipality of Olsztyn in July.

Olsztyn’s Mayor Piotr Grzmowicz as the host gave a speech in the ceremony, where Atilla Gökhan Kızılarslan, Chief Commercial Counsellor of the Turkish Embassy in Warsaw, Fatma Durmaz Yilbirlik, the Vice-Chairperson of the Board of Directors of Durmazlar Holding, the holding officials, Olsztyn Municipality officials and citizens also participated.

Piotr Grzmowicz stated that they were able to return to rail system transport, which was abolished in 1965, only in 2004 and emphasized that rail systems are the cleanest and cheapest transport system for the people of the city and the region.

Mayor Grzmowicz stated that they work to develop the tram vehicle numbers and infrastructure within this scope and they are happy to sign an agreement with Durmazlar Holding, meeting all their expectations as a result of the tender they initiated for buying 12 tram vehicles.

Grzmowicz said, “For now, we ordered 12 tramways. Durmazlar Holding’s trams are much quieter and eco-friendly than the trams we are currently using. We may buy 12 more trams according to circumstances after the upcoming 21 months delivery period. The satisfaction received from Panorama model trams, which is produced by Durma Holding and used in Kocaeli and Samsun, was a determining factor for us to choose Durmazlar.”

Fatma Durmaz Yılbirlik stated: “Our goal is to make the world better with advanced technology”.

Fatma Durmaz Yılbirlik, the Vice-Chairperson of the Board of Directors of Durmazlar Holding gave a speech after Mayor Piotr Grzmowicz and expressed that she was very glad to be in Olsztyn for this meaningful purpose. She stated that gaining the trust of the Olsztyn Municipality and the people of Poland fills them with pride as Durma Holding, which exports to 120 countries and serves Polish industrialists for more than 30 years and wished that the agreement would be the first step in rail systems between Poland and Turkey. Yılbirlik said “We are fully convinced that we will not let down the trust in Durmazlar Holding, which always aims for better and analyzes the needs of the different cultures and aims to make the world better with technology as Turkey’s co-founder of Industry 4.0. I wish this agreement to be good for the city of Olsztyn and Durmazlar”. Fatma Durmaz Yılbirlik, the Vice-Chairperson of the Board of Directors of Durmazlar Holding and Piotr Grzmowicz, the Mayor of Olsztyn signed agreements and congratulated the officials in the Turkish and Polish delegations and had their photo taken after the speeches on “The first tramway export of Turkey”. Fatma Durmaz Yılbirlik made statements after the ceremony and said that they entered the rail systems sector in 2009 with the 65-year experience and infrastructure of Durmazlar. Stating that they were very happy to export to Olsztyn as the first tram export of Turkey with the company that produced roughly 100 subway and tram vehicles, Yılbirlik also said that it was her duty and goal to increase the cultural relationship and the friendship between the two countries as the Honorary Consul of the Marmara Region in Poland since 2014. “It’s an honor for me and my country to continue to work both culturally and commercially and to make this happen,” she said.

Aiming to be the first in the world rail systems sector, Durmazlar Holding established Durmaray in 2010, which operates in the field of rail systems technologies, projects, design, software, installation, testing and commissioning. It started production in 2 separate facilities which have 15 thousand m2 of closed and 50 thousand m2 of open area for frame and bogie production and 25 thousand m2 and 10 thousand m2 open area for rail systems vehicle production. The first tram produced by Durmaray, İpekböceği was put into the service of Bursa in 2013. It also won 60 Light Rail System and 12 bidirectional tram projects initiated by Bursa Metropolitan Municipality in 2015.

The company’s new generation design Panorama was put into service with 8 vehicles in Samsun and with 12 bidirectional vehicles in Kocaeli in 2016. Panorama trams will also be available for Olsztyn after 21 months. Having completed their 30-year life test, tested and approved with international standards, the trams stand out with their low energy consumption, low noise level, eco-friendly and safe design. Panorama trams prioritize passenger’s comfort with its 370 mm depth of entrance and 100% low floor. They have 210 passenger capacity with a length of 32 thousand 500 mm and a width of 2 thousand 500 mm.